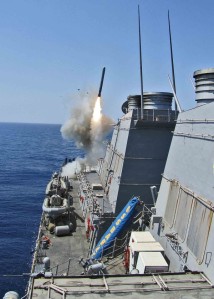 Naples, Italy – The U.S. Navy, while partnering with joint forces and coalition forces, made several first-time accomplishments During Operation Odyssey Dawn March 31. During the beginning of Odyssey Dawn, strikes were made against Libyan military sites by coalition forces with Tomahawk Land to Air Missiles (TLAMs), the evening of March 19. Amidst the forces were two U.S. Navy ships and three submarines, including the USS Florida (SSGN 728). This strike against Libyan forces marked the first time that an Ohio-class guided-missile submarine launched a TLAM in conflict.

Vittoria was engaged and fired upon by a U.S. Navy P-3C Maritime Patrol aircraft with AGM-65 Maverick missiles; the first time that these missiles have ever been fired on a hostile vessel by a P-3C.

“P-3s have provided 24/7 ISR maritime domain awareness critical to the protection of U.S. and coalition surface assets in the JOA since the initiation of Odyssey Dawn,” said Capt. Dan Schebler, commodore, Commander Task Force 67. “This engagement demonstrates the ability of the P-3 to complete the sensor-to-shooter kill chain, in parallel providing a key capability to the Joint Force Maritime Component Commander and the Composite Warfare Commander.” While in pursuit of Vittoria, USS Barry (DDG 52), part of the Kearsarge Expeditionary Strike Group, and coalition naval forces from the French, Italian, Spanish and United Kingdom navies, contributed to the engagement by keeping merchant and humanitarian assistance vessels away from the engagement area and out of harms way. Joint Force Maritime Component Command was the maritime component of Joint Task Force Odyssey Dawn and was commanded by Vice Adm. Harry B. Harris Jr.