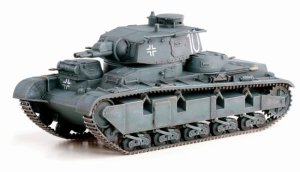 Germany’s first attempts at creating a heavy tank commenced in the early 1930s with a design known as the Neubaufahrzeug (“New Construction Vehicle”). It was not a success, however. Slow-moving and boasting multiple turrets, it was ill equipped for the type of rapid, mobile warfare that Blitzkrieg tactics required. For this reason, only five Neubau-Fahrzeug heavy tanks were ever built, the first two of which were prototypes. However, the three 25.8-ton series-production tanks (Numbers 3-5) that had been manufactured in 1935-36 participated in the 1940 invasion of Norway. They were deployed within a specially formed Panzerabteilung called Pz.Abt.z.b.V.40, but this was the extent of their wartime combat involvement. Their armament included a 7.5cm KwK L/24 main gun, 3.7cm KwK L/45 cannon and two 7.92mm machine guns.

Dragon Armor is offering an impressive 1/72 scale model representing the production tanks. Utilizing research and molds from the previously released plastic kit, this miniature Neubau-Fahrzeug Nr.3-5 is impressive in its early-war camouflage color of panzer gray (dunkelgrau). The camouflage scheme is enhanced with white balkenkreuze markings as well as a distinctive number ‘10’ on the rear of the main turret. This is a fine rendering of the NbFz, and it adds to the Dragon Armor items already available.