The Evolution of Batman’s Vehicles 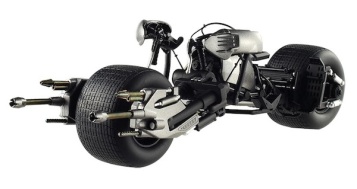 Batman, the comic book superhero featured in DC publications, has fascinated fans for generations. This fascination shows no slowing down as evidenced by the sale of the original Batmobile for more than $4.6 million at the 2013 Barrett-Jackson auction. Batman memorabilia extends from the children’s toys to the precision-detailed models for serious collectors, and today Batman collectors have several to choose from as an addition to their collection.

Also making its first appearance in the 1960s TV series Batman, the Batcycle was the specialized motorcycle for Batman. Mattel Elite created the Batcycle model complete with Robin’s sidecar. Fast forward to “The Dark Knight Trilogy” movie series to the Bat Pod, an escape pod that was integrated into the Tumbler. It serves as an auxiliary vehicle armed with dual front-mounted cannons, grappling hooks, and machine guns. Most notably is the Bat Pod’s steering with the driver’s shoulders, not his hands and features the engines mounted inside the wheels instead of the frame. For Batman collectors, the Hot Wheels Elite Bat-Pod is a 1:18 diecast replica that features giant wheels like the ones used on the Tumbler and is complete with the armament details. This latest release comes highly recommended.